Where to Stay, When to Go, Why Pick Tbilisi - Tips from a Digital Nomad
123

The capital of Georgia might not have crossed your mind before but this historical city, described as the balcony of Europe by locals, is set to be the next big thing when it comes to top destinations for digital nomads.

Small but mighty would be one way to describe this country with its complicated history. Certainly not the easiest place to pronounce, Tbilisi (Tuh-Blee-See) is the combination of two words and means ‘warm waters’ due to its sulfur baths. It’s a delightful blend of East and West thanks to its Eurasian location. A contemporary European lifestyle is gaining popularity but the city still values its roots and traditions being a true cultural mixing pot with influences from Turkey, Russia, Armenia, Azerbaijan, and Iran.

This post-Soviet city is still in a state of transition, still seeking to find its own style after Persian and then Russian rule and it looks to Europe for inspiration. The younger generation are helping to shape a cosmopolitan city with modern architecture mingling with art nouveau and Soviet modernist buildings. This is a city on the verge of great things and is now on the edge of the radar for digital nomads and adventure backpackers who know a good thing when they find it!

Tbilisi is becoming popular with digital nomads due to its good internet, low cost of living, kindly locals, and pleasant weather. An understanding of Russian will help travelers feel comfortable in the city unless already fluent in Georgian but most young people, as well as professionals, speak English. There are only a couple of dedicated co-working spaces at the moment, this digital nomad lifestyle still being a very new concept to Tbilisi but there are numerous laptop friendly cafes with wifi, some having become informal hubs for expats and nomads. The city even has a wifi hotspot, the connection isn’t always that strong but if you’re downtown you can usually send an email whilst waiting for the bus!

So, be one of the early pioneers and visit before it becomes mainstream! Wander through the cobbled narrow streets of the old town and discover churches, mosques, and the oldest sulfur bath in Georgia. You literally can’t miss the hillside fortress which dates back to the 4th century and is an ancient symbol of the city. A ski resort and the huge Tbilisi reservoir are on the city’s doorstep putting outdoor adventure in the stunning countryside within easy reach.

Wouldn’t you want to save time and discover the absolute BEST places in Tbilisi? – Cafes, accommodation, coworking, gyms, yoga & more

There are many travel guides for tourists who want to visit Tbilisi.

Best Time to Travel to Tbilisi

Tbilisi enjoys a sub-tropical climate with mild mostly dry Winters, warm but wet Springs, dry hot Summers, and warm Autumns making it rather perfect all year round! There is no peak tourist season yet so the best time to visit is purely down to your weather preference.

January-February: Snow in the city is very rare with the daytime Winter temperatures generally mild compared with Europe. The crisp, bright days have very little rainfall but nighttime temperatures do drop, sometimes as low as freezing. In Georgia the Orthodox calendar is followed so Christmas is celebrated on January 7th with New Year celebrated on January 14th meaning celebrations last 2 weeks, plan it right and you might be able to experience 2 Christmases in 1 year!

March-May: The weather in March can be very unsettled with cold overcast mornings but warm sunny afternoons, you never know what to expect. Nature reawakens from the 2nd half of March with temperatures rising through April and into May when lighter Summer clothing can be worn through an umbrella is still needed due to Spring showers. Easter in Georgia typically falls in April when local traditions can be observed and at the start of May, there’s the New Wine Festival. May 26th is Independence Day and a military procession takes place in the city streets.

June-August: June is hot but not unbearably so compared with July and August when air-conditioning is a must to stay comfortable in the hot and humid city. Many locals escape the city for the cooler mountain regions in October which can leave the city feeling rather deserted. The Tbilisi Open Air festival is held in June with rock and electronic music concerts taking place. In July Art-Gene can be witnesses, a traditional folk festival with local bands and dancers.

September-October: September and early October are very pleasant with warm but not sweltering heat. Temperatures decrease from mid-October as the trees change color to create some breathtaking scenery and the rain returns to revive the parched land. The day of Tbilisi is celebrated in September and the Tbilisi International Festival of Theater also starts in September, running until the start of October.

November-December: November sees mixed days of rain and sunshine but temperatures are still moderate compared to Europe. In December temperatures are cool rather than cold with very little rainfall. The Tbilisi Jazz Festival takes place in November as does the Photo Festival. Don’t expect Christmas celebrations in December as Tbilisi follows the Orthodox calendar which means both Christmas and New Year are celebrated in January!

Tal Gur is a world traveler and personal development enthusiast. An adventurer at heart, after trading his daily grind for a life of his own daring design, Tal spent a decade pursuing 100 major life goals around the globe. His journey continues as a location-independent blogger, lifestyle entrepreneur, and coach. Tal’s published two books: One Year to Freedom, a 1-Year Roadmap to Living Life on Your Own Terms; and, his most recent book and bestseller, The Art of Fully Living – 1 Man, 10 Years, 100 Life Goals Around the World.

These Hacks Can Save You Hundreds (...Or More)

Sign up below to get money-saving hacks and nomad secrets for free. You can unsubscribe at any time

Read The Art of Fully Living

There's no going back-once you embark on the journey you're meant to live, it's impossible to settle for anything less than your dreams. 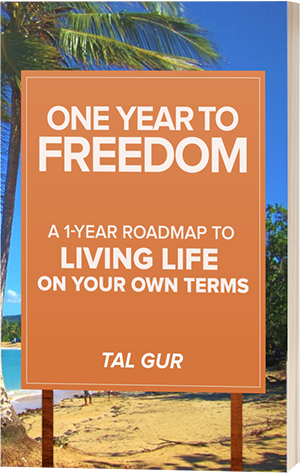 This book just may change your life

One Year to Freedom is more than a personal development book. It's a roadmap for living life on your own terms and it just might change your life.

__CONFIG_optin__{"optin": 0,"color":"red","size":"medium","text":"Yes, Sign Me Up!","layout":"horizontal"}__CONFIG_optin__
These Hacks Can Save You Hundreds (…Or More)
Sign up below to get my best money-saving hacks and nomad secrets.
It’s FREE and you can opt out at any time.
Ready to experience the best places in the city?
Enter your email below and get the guidebook for FREE when it launches:
Ready to experience the absolute best that Barcelona has to offer?
Get the guidebook by entering your email address below:
Loading Comments...